‘Counter-Strike: Global Offensive’ has been hailed for years as the king of tactical FPS games. But, in comes ‘Insurgency!’ Praised for its tactical minds and military themed gameplay, ‘Insurgency’ boasts hyper-realistic mechanics that forces the player to work together to complete their goals.

‘Counter-Strike’ boasts tactical gameplay. But how tactical can a game be? Well, ‘Insurgency’ answers that question very well. In a game where 1 bullet can kill an individual and one misplaced grenade can decimate the entire team, one must take consideration where he stands in the battlefield and who he shoots. Oh, that’s right. Did we forget to mention? Friendly fire isn’t dialed down like ‘Counter-Strike: Global Offensive.’ Unlike said game, the amount of damage that you deal to your enemies is synonymous to the damage you deal to your friends. This. This feels like the most realistic aspect of the gameplay. The fact that you can decimate an entire enemy team with just one clip is astounding. In fact, most of the time, you’ll either die by one bullet, or kill by one bullet. You really have to take these factors into consideration. Every move you make. Every bullet you fire. It may very well change your fate. Heck, I’ve actually let a guy walk past me every now and then for the fear of exposing myself to the opposing forces. 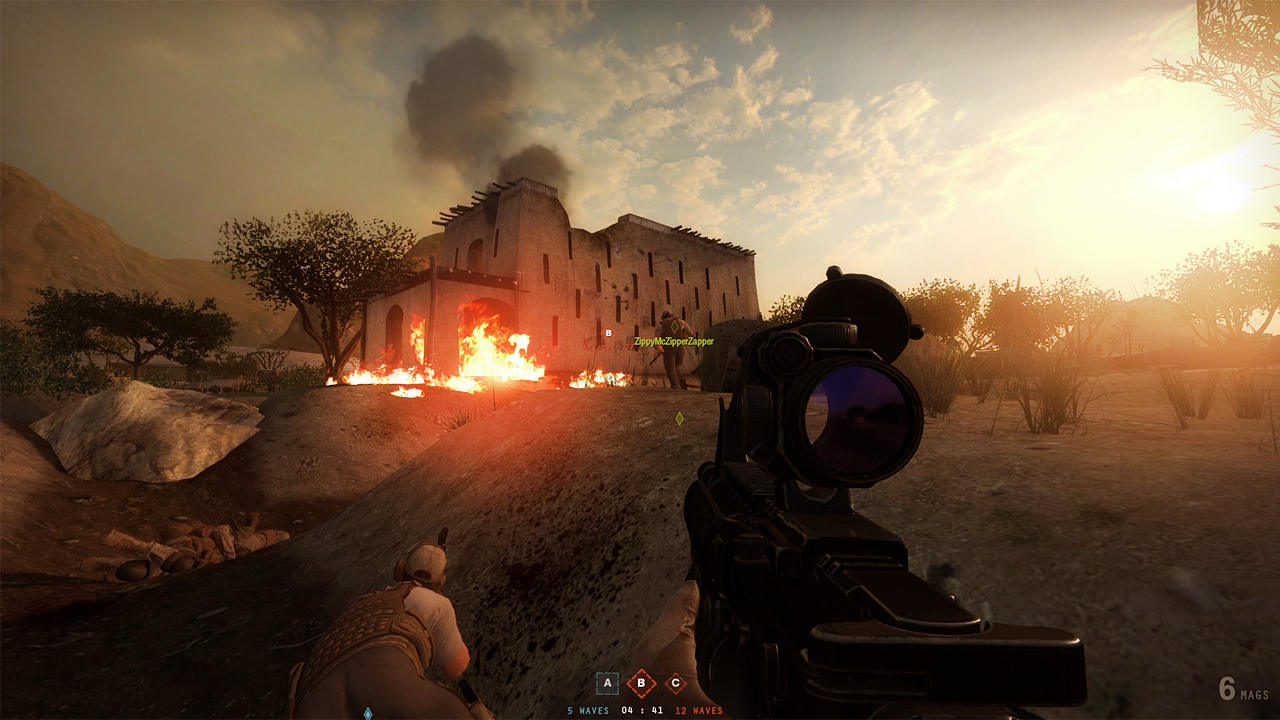 Nope, we’re not quite done. At the start of the round, each player is given the exact same amount of equipment points that they can spend. They can then go ahead and use these points to customize your kit (weapon / armor / equipment / utility), to any way they like. Heck, fancy an 8x scope on an ‘M4A14?’ Go for it. Want a 4x scope on a buck shotgun? Why not? Maybe you feel like jumping into the battlefield with absolutely no armor and a few dozen grenades stacked into your rig? No one’s stopping you! The game allows any player to simply put pieces together and create their own kit. The freedom that the game gives the player is truly amazing. I, for one, am a  really big fan of the customization options and the tactical gameplay.

Yes I’ve been playing ‘Sandstorm’ quite a bit since release. I really like it. The gameplay is intense and takes some getting used to but if you like tactical shooters the you should enjoy it. Performance could be a bit better though.

Even, Even More Tactical Gameplay

Some games, such as ‘Counter-Strike: Global Offensive’ has evenly balanced maps. The counter terrorist and terrorist side are essentially evenly paired in terms of mapping. Granted, some maps are more one-sided than the other. In ‘Insurgency,’ however, the player is essentially pit into an enclosed open-world map. The exact opposite of ‘CS:GO.’ I cannot stress how important map knowledge is. For instance, I cannot tell you exactly how many times I’ve accidentally ran into the enemy’s spawn point, but it’s one hell of a number. The developers also take the time and consideration of every object and item placement. Yes, cover. Cover is an essential part of combat. 99% of the time, if you’re caught out in the open, you’re dead. I had to learn this the hard way. The very, very hard way.

‘Insurgency’ isn’t a tactical FPS game that one can simply jump into and enjoy. Kit management, map knowledge, cover assessment and teamwork plays an important role in every match. Unlike ‘CS:GO,’ which just takes a bit of practice, map knowledge and skill, ‘Insurgency’ requires one to think just like a soldier. Act like a soldier. Fight like a soldier. The enemy is closing in. You can either jump to another cover, or risk staying and getting shot. But beware! Jumping to another cover with 10 pounds of equipment isn’t the easiest. You probably won’t be thinking about scenarios like this in ‘Counter-Strike: Global Offensive,’ now would you?